Sandy beaches protect most effectively coastal cliffs against erosion and collapses. This is why it is strictly forbidden in the Crimea to use the beach sediments for construction purposes. 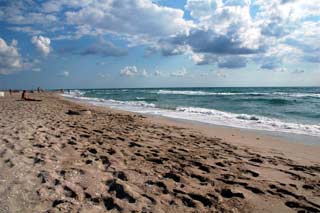 Sandy beach of the Crimea is an excellent relax at the Black Sea after bathing and curative sand baths. Variants of the rest on sandy beaches of the Crimea, including beaches at the South Spit, beaches of Mezhvodnoe and Popovka are different: there is a hotel on the beach; you can rent a house on the beach. 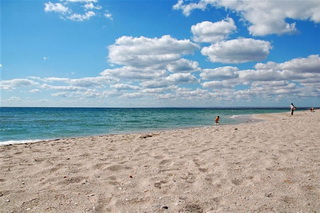 Natural heating of sand of beaches by sun as well as presence of a calcareous s particles of sea shell and it’s slight alkaline reaction, contribute to one of the important properties of the sandy beaches of the Crimea, which is used in the treatment with sand baths or arenation. Medicinal properties of sand of sea beaches are that in contact with sweat the formation of carbon dioxide occurs and in connection with it the conditions for slight carbon dioxide treatment appear. Sand baths on the sandy beaches of the Crimea have the mechanical and physical (thermal) and chemical effects on the body. Such a treatment on the beaches gives anti-inflammotory , analgetic and also desensitizing effect. Ammism on the sea beaches of the Crimea resorts is used in diseases of the musculoskeletal system of non-tubercular origin, in diseases of the peripheral and central nervous system accompanied by motor disorder of mild to moderate severity as well as soft tissue diseases, myositis, bursitis. One treat with sand baths on the beach of the Crimea such diseases as treated with mud. Doctors don’t advice ammism with circulatory failure above the first degree; acute diseases in which heat applications are forbidden.

To receive a common sand baths on the sandy beaches of the Crimea patient lies down in 10-15 meters from the sea on his back covered with a layer of sand 5-8 cm, except for the heart. At the local sand baths of type of pants and jackets patient can cover himself with sand, excellent rest and treatment at the beach resort. 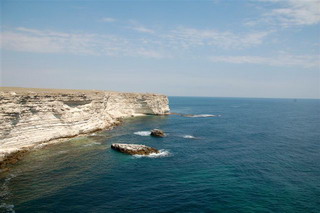 Seaside neighborhood of the village Olenevka is attractive in a way where Dzhangulsky ridge breaks with plumb wall of 60 meters above sea. Here, along the slope sliding terraces go to the sea sometimes in several rows with a slope generally in the direction opposite the motion of landslides. Almost the entire coastline of the sea is strangely torn with protrusions randomly piled limestone massifs or landslide hills. Landslide remnants amaze with their unusual beauty. These are natural ramparts, large monolithic nature, pyramidal rocks, etc. The lower slopes of the ravines that cut the seaside and terraces are covered with dense shrubs and tall grass. These natural growths, coastal caves and niches are a haven for many birds. In this area, up to the sandy beaches of the Donuzlav resort beach band is narrow and somewhere there no beach at all. Usually in the mouths of ravines there are small beaches formed from sand frayed mollusk shells and also small pebbles beaches.

Small beaches in cozy, narrow, wild bays are very picturesque and romantic, and they often end with cool grottoes. Most of these bays and beaches extend to the southern coast of western Crimea between Tarkhankut Cape and Uret. It is a quiet kind of beach rest in the Crimea, here you can get on a board but during the storm this section of the Black Sea coast is inaccessible.